Adelaide’s achievements were indeed very substantial, and they signalled a new era of activism for women at the dawn of a new century. Her death in 1910 was deeply felt at the time yet her legacy lives on today and she has been commemorated in numerous ways throughout the century since her death.

Today, the Victorian Order of Nurses is Canada’s largest, not-for-profit home care organisation. With a staff of more than 7000 and supported by more than 14,000 volunteers, it is a daily presence in the lives of many Canadians.

The Women’s Institute, internationally organised through the Associated Country Women of the World, has over 9 million member societies in over 70 countries.

All of Adelaide’s work during her life did not go unnoticed by her contemporaries. After her death they honoured her in many ways, read on to find out more.

One year after Adelaide’s death, one of Hamilton’s new schools was named after her. Her beloved husband, John Hoodless, laid the cornerstone.

On October 27, 1937, 300 people gathered to pay homage to this remarkable woman and watched as Lady Tweedsmuir unveiled a cairn dedicated to Adelaide’s memory. The cairn can still be found at the intersection of Blue Lake Road and Highway #24, near St. George, Ontario. To this day it is still being cared for by the Brant District W.I. 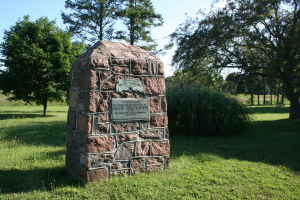 A Flower by any Other Name

In 1975, Dr. Henry Heard Marshall developed a rose that he named after Adelaide. The rose is deep pink, with a mild fragrance, and is able to withstand very cold winters. A fitting tribute to a strong and inspirational woman. 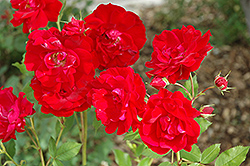 A Stamp for Adelaide

In 2003, the Hoodless Garden was created as a part of numerous celebrations to mark the 100th anniversary of the founding of the MacDonald Institute in Guelph, Ontario. As one looks out over the Hoodless Garden, one is struck by a silver outline of Adelaide’s face. Cut out of 1/4″ aluminium, the sculpture by artist Jan Noestheden towers over the close observer. Jan stated, “I designed the aluminium portrait of Adelaide Hoodless in 2000, as an homage to a great woman, larger than life”. Jan mounted it 6 inches away from the wall, allowing light to shine through the image, casting a shadow onto the wall that moves with the sun. This sculpture is not only beautiful; it is a metaphorical statement on Adelaide’s historical accomplishments and her enduring impact. 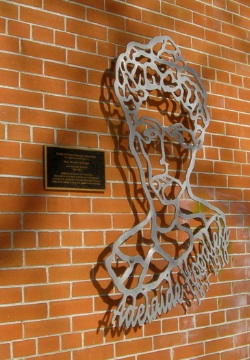 One hundred years after the death of Adelaide Hunter Hoodless, her commemoration does not exist in quantity, but it does exist in quality. Women around the world know her name, and through the organisations she founded, people are cared for, women have increased mutual support, and those who work in the home are well-supported and respected.

PLEASE NOTE: The museum will be closed from November 12th - 16th, 2022 so staff can prepare for the holiday season. We will re-open November 17th, 2022 and require advanced tickets.